12 November​ 2018
Book Launch "Tuscan Places"
​​Foreign Press Club
Australians and New Zealanders have come to live in, or visit Tuscany for more than a century. Why did writers, artists, scholars, soldiers and others, such as Robert Hughes, Germaine Greer, David Malouf,  Jeffrey Smart, Alan Moorehead, Allen Curnow, come to Tuscany and what did they find?
This is the subject of Desmond O’Grady’s latest book Tuscan Places which he will discuss with Tomaso Montanari at the Foreign Press Club (via Dell’Umiltà 83/c) from 6.00 pm on Monday, November 12th. Tomaso Montanari is a professor of art history, an author and a television personality. He declined an offer to be Minister of Culture in the current government.
Entrance is free but bring a document of identity.
Copies of the book will be available.
Guests can buy drinks at the bar until it closes at 7 pm. 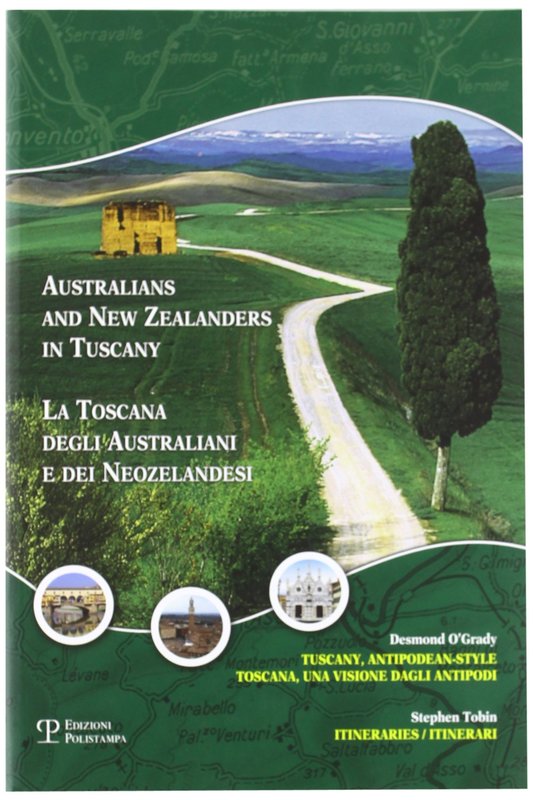 Book cover -- striking photograph taken in Pistoiai by the renowned Tuscan-dwelling Autralian phographer Stephen Roach ROME -- Tuscany has infamously attracted flocks of international tourists and settlers throughout the course of its history, drawn to the region due to its picture-perfect countryside, prolific culture and pristine climate amongst the wealth of other very typically enchanting and frequently-iterated qualities.
In his latest book, “Tuscan Places: Antipodeans Seeking More Than Michelangelo,” the Melbourne-born, Rome-dwelling writer and journalist Desmond O’Grady decides to explore the particular 150-year-long relationship between Australians and New Zealanders and this beautiful Italian region, consciously yet refreshingly encapsulating -- but also going beyond -- these traditional clichés, asking “What do Antipodeans seek in Tuscany and what do they find?”
The writer begins by describing how he too, when growing up in Melbourne, was not exempt from being caught up in the enraptured voyeur’s fascination with the Italy of high culture, neorealist cinema, passionate people, and beautiful women -- the image of Italy seemingly engrained in the international psyche. He describes how Tuscany was seen almost as a nation in itself, with these values concentrated into an accessible Italian capsule for the foreigner.
O’Grady’s own memory of his arrival and time first spent in Florence, lodged at an Irish-run pensione, sparks this original exploration of the history of the Antipodean relationship with Florence and Tuscany in general that had preceded and then existed alongside the writer. Thus, the book sets out to trace this relationship and records the varied and unique stories of Australians and New Zealanders, renowned or otherwise, who spent time in this well-trodden region of the Bel Paese.
The author traces the stories of many enamoured artists, writers, academics and journalists living in what was viewed by many as “the epitome of culture.” Amongst some of the most notable Antipodean Tuscan settlers captured in the book are Germaine Greer, Shirley Hazzard, Peter Porter, Robert Hughes, David Malouf, Alan Moorehead, Martin Boyd and Louise Mack. Their stories are all different and do not always end with their original sense of enthusiastic enchantment, such as an uninspired Greer who left when modernity hit in the form of made-up, dressed-up farmers’ daughters and mass tourism.
The great war correspondent Alan Moorehead moved to Florence in 1948, like many others, to pursue success as a novelist in peace after the war. It was there that he met the famous art connoisseur Bernard Berenson, a neighbour, and “some of the most literate people in Europe.” O’Grady in fact includes at the end of his book, a section containing a previously-unpublished epistolary exchange between the two men. Despite lacking something meaty to inspire memorable books in Tuscany -- that which he would later find in other continents --, the Moorehead family built a house in this stunning Italian region, inspired by the glowing light of the Tuscan sky, reminiscent of his childhood in Australia. Some align Tuscany “with mankind’s highest aspirations” while others reflect more on what light it throws on Australia.
The work is a varied and colourful tapestry, cleverly stitched together with extracts from Tuscan-inspired creations -- poetry, quotes from novels, descriptions of works of art, war stories, interesting facts and figures, and O’Grady’s own personal commentary. The writer leads us through his own findings in an informal, witty conversational style, recounting in a simple but engaging way the stories he learnt himself throughout the course of this endeavour.
Through these various successive tales, linked together in original ways under a range of different thematic headings, Desmond O’Grady shows how the 150-year-long relationship between the Antipodeans and Toscana has so far been an "opportunity but also a challenge," a reflection O’Grady presents through this latest multi-voiced creation.
“Tuscan Places: Antipodeans Seeking More Than Michelangelo” by Desmond O'Grady. 203 pages. Arcadia - Australian Scholarly Publishing. 25 euros -- sold at the Anglo-American Bookshop and the Almost Corner Bookshop in Rome.
nkd