Ode to the West Wind
from England through Italy to India

Giuseppe Albano, the Curator of Keats-Shelley House in Rome, speaks with
the Indian & Italian Co-Producers, Jitendra Mishra and Ulisse Lendaro,
about Human OAK the short film based on Shelley’s poem during its 200th anniversary year. 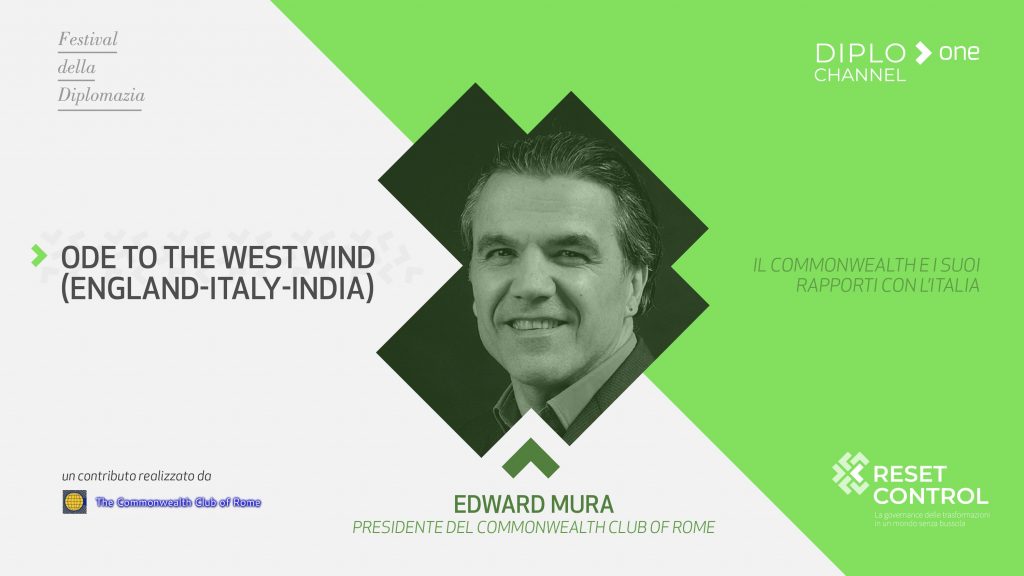 https://diplomacy2020.it/pagina-archivio-evento/?nomeventoricerca=ode-to-the-west-wind-england-italy-india
Anna Valle, who stars in the film, will intervene with a video message.

Directly after the event (at 17.30) the Festival will broadcast
an aperitif with the British Ambassador to Italy Jill Morris.
Keats-Shelley House
​The Keats-Shelley House is a museum and library dedicated to the second-generation English romantic poets who lived in, and were inspired by, Italy, and housed in the final home of John Keats by the Spanish Steps in the centre of Rome. The House has been cared for since 1906 by the Keats-Shelley Memorial Association, a British charity whose Patron is HRH The Prince of Wales. The museum is currently celebrating Keats-Shelley200, a programme to celebrate the legacies of John Keats and Percy Bysshe Shelley, who died in Italy 200 years ago
https://ksh.roma.it/


Ode to the West Wind
BY PERCY BYSSHE SHELLEY
I

O wild West Wind, thou breath of Autumn's being,

Thou, from whose unseen presence the leaves dead


Yellow, and black, and pale, and hectic red,

Who chariotest to their dark wintry bed


The winged seeds, where they lie cold and low,

Thine azure sister of the Spring shall blow


Her clarion o'er the dreaming earth, and fill

(Driving sweet buds like flocks to feed in air)

With living hues and odours plain and hill:

Thou on whose stream, mid the steep sky's commotion,

Shook from the tangled boughs of Heaven and Ocean,


Angels of rain and lightning: there are spread

On the blue surface of thine aëry surge,


Of some fierce Maenad, even from the dim verge

Of the horizon to the zenith's height,

The locks of the approaching storm. Thou dirge


Of the dying year, to which this closing night

Will be the dome of a vast sepulchre,


Of vapours, from whose solid atmosphere

Black rain, and fire, and hail will burst: oh hear!

Thou who didst waken from his summer dreams

The blue Mediterranean, where he lay,

Lull'd by the coil of his crystalline streams,


Beside a pumice isle in Baiae's bay,

And saw in sleep old palaces and towers

Quivering within the wave's intenser day,


All overgrown with azure moss and flowers

So sweet, the sense faints picturing them! Thou

For whose path the Atlantic's level powers


Cleave themselves into chasms, while far below

The sea-blooms and the oozy woods which wear

The sapless foliage of the ocean, know


Thy voice, and suddenly grow gray with fear,

And tremble and despoil themselves: oh hear!

If I were a dead leaf thou mightest bear;

If I were a swift cloud to fly with thee;

A wave to pant beneath thy power, and share


The impulse of thy strength, only less free

Than thou, O uncontrollable! If even

I were as in my boyhood, and could be


The comrade of thy wanderings over Heaven,

As then, when to outstrip thy skiey speed

Scarce seem'd a vision; I would ne'er have striven


As thus with thee in prayer in my sore need.

I fall upon the thorns of life! I bleed!


A heavy weight of hours has chain'd and bow'd

One too like thee: tameless, and swift, and proud.

Make me thy lyre, even as the forest is:

What if my leaves are falling like its own!

The tumult of thy mighty harmonies


Will take from both a deep, autumnal tone,

Sweet though in sadness. Be thou, Spirit fierce,

My spirit! Be thou me, impetuous one!


Drive my dead thoughts over the universe

And, by the incantation of this verse,


Scatter, as from an unextinguish'd hearth

Ashes and sparks, my words among mankind!

Be through my lips to unawaken'd earth


The trumpet of a prophecy! O Wind,

If Winter comes, can Spring be far behind?​
​